President Barack Obama faces a litany of bad news.  The president’s job approval rating, his favorability, and his rating on the economy have hit all-time lows.  To compound matters, three in four Americans still believe the nation is in a recession and the proportion who thinks the country is moving in the wrong direction is at its highest point in more than a decade.

According to this McClatchy-Marist Poll, the president’s approval rating is at 39% among registered voters nationally, an all-time low for Mr. Obama.  For the first time a majority — 52% — disapproves of the job he is doing in office, and 9% are unsure.

“President Obama needs to reboot his presidency,” says Dr. Lee M. Miringoff, Director of The Marist College Institute for Public Opinion.  “Although numbers like these typically spell doom for an incumbent’s re-election prospects, the Republicans in Congress and eventually his GOP opponent could still provide Obama with running room.”

President Obama’s current approval rating is his lowest since last December when 42% of voters thought his performance fell short.  When McClatchy-Marist last reported this question in its August 9th survey, voters divided about how the president was performing in office.  44% of the national electorate approved while 46% disapproved.  10%, at the time, were unsure.

Fewer voters now have a favorable impression of President Obama.  46% view him favorably while 48% perceive him unfavorably.  Five percent are unsure.  President Obama’s current favorability rating is his lowest since taking office.  His previous low occurred last November when 47% of the electorate thought well of him.

In McClatchy-Marist’s August survey, a slim majority — 52% — felt positively about the president while 41% had a less than stellar view of him.  Eight percent, at the time, were unsure.

When McClatchy-Marist last reported this question in June, 37% approved of the president’s approach, 58% disapproved, and 5% were unsure.

However, many voters still don’t believe the president is responsible for the nation’s current economic climate.  Six in ten — 60% — think Mr. Obama inherited the current economic conditions while 34% report they are a result of his own policies.  Six percent are unsure.

In McClatchy-Marist’s August survey, 59% thought President Obama was handed the nation’s economic crisis while 33% said his policies contributed to them.  Eight percent, at the time, were unsure.

—   Democrats have flipped on this question.  A majority of Democrats — 56% — say brighter economic days are ahead.  Last month, the opposite was the case.  At that time, a majority — 57% — reported the worst was still ahead.

—   Fewer independent voters are pessimistic.  66% say there is more bad economic news to come, down slightly from 71% in August.

—   78% of GOP voters say there are more hard times on the economic front.  75% held this opinion last month.

Overall, Americans are pessimistic about the direction of the country.  73% say the nation is headed in the wrong direction, 22% believe it is moving in the right one, and 5% are unsure.  This is the highest proportion of Americans in more than a decade to think the nation needs its course corrected.  Last month, 70% of the population reported America was on the wrong track, 21% said it was on the right one, and 10% were unsure. 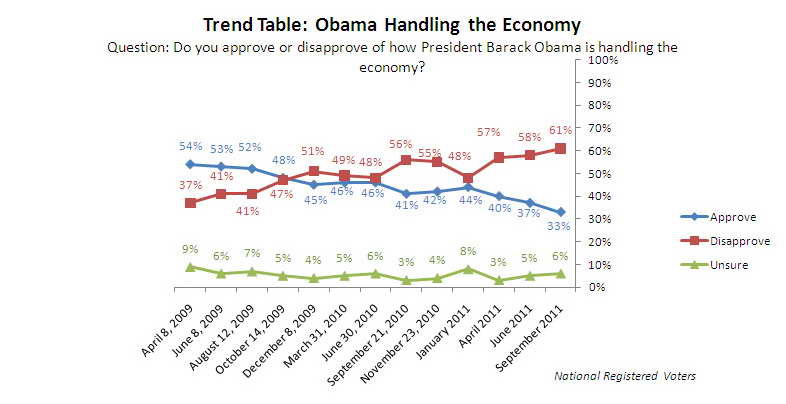 More than three quarters of U.S. residents — 77% — doubt unemployment will improve in the next year.  Although a slim majority of Americans — 51% — believes President Barack Obama’s proposal to create jobs will do more good than harm, more than six in ten residents nationally — 63% — don’t believe the president’s proposal goes far enough to improve the nation’s jobs picture.  71% want the Republicans in Congress to either pass the president’s proposed jobs plan or push the bill through with revisions.

—   78% of Democrats and 59% of independent voters think the proposal does not go far enough.   Even a majority of Republicans — 54% — believes the president’s plan should do more.

—   Twice as many Democrats than Republicans — 17% — or independents — 17% — believe unemployment will decline in the next year.  However, even among Democrats, only 35% think that will be the case.

—   Half of voters — 50% — believe the president’s plan to create more jobs will do more good than harm.  39% say it will do more harm than good, and 1% thinks it will not make a difference.  Nine percent are unsure.

—   Not surprisingly, 82% of Democrats report the president’s plan will do more good while 74% of Republicans believe it will do more harm.

—   37% of registered voters want the Republicans in Congress to pass the president’s plan in its current form.  34% call for its passage with revisions, and 21% do not want it passed.  Eight percent are unsure.

—   Republicans divide.  41% think the Congressional GOP should pass the bill with amendments while 40% don’t want the bill passed at all.

—   There is less of a consensus among independent voters.  39% want the Republicans to pass it with revisions, 35% want the president’s jobs plan to be passed as it was proposed, but only 18% do not want it passed at all.

—   46% of the electorate has more trust in the president to turn the jobs picture around while 41% have more confidence in the Republicans in Congress.  13% are unsure.

Table: Does President Obama’s Jobs Plan Go Too Far or Not Far Enough?

Table: The Status of Unemployment Next Year

President Obama isn’t the only one who fares poorly in the court of public opinion.  Many registered voters aren’t happy with the job performances of the Republicans or Democrats in Congress.

o   There has also been an increase in the proportion of independents who disapprove of how Republicans are performing in Congress.  71% currently disapprove while 64% thought this way last month.

o   71% of independent voters disapprove of the job of Congressional Democrats.  In August, 59% shared this opinion.

More voters, however, still think the president is positioned about right ideologically than either the Republicans or Democrats in Congress.