Registered voters nationally are not satisfied with how President Barack Obama is handling the nation’s economy.  According to this McClatchy-Marist Poll, four in ten voters — 40% — approve of how the president is dealing with the country’s economy while nearly six in ten — 57% — disapprove.  Only 3% are unsure.  Mr. Obama’s approval rating on the economy is the lowest of his presidency.  His previous low was last September when just 41% gave him a thumbs-up on the issue.

When Marist last reported this question in January, voters divided.  At that time, 44% approved of how the president dealt with the economy while 48% disapproved.  Eight percent were unsure.

“These economic numbers could spell trouble for President Obama’s re-election prospects,” says Dr. Lee M.Miringoff, Director of The Marist College Institute for Public Opinion.  “Oddly, though, he still isn’t being faulted for the sluggish economy.  Most think it was there waiting for him when he took office.”

There has been a change among Democrats and independents on this question.  While 71% of Democrats approve of how the president is handling the economy, 27% disapprove.  This is a 12 percentage point increase in the proportion of Democrats who disapprove since January.  Among independent voters, 34% approve while more than six in ten — 63% — disapprove.  Here, too, there has been a jump in the proportion of voters who are dissatisfied with how Mr. Obama is dealing with the economy.  In January, half — 50% — shared this view.

There has been little change among Republicans.  11% think the president is on the right economic track while 87% do not.  In January, those proportions stood at 7% and 88%, respectively.

Disapproval of the president’s fiscal management spans economic divides.  42% of those who earn less than $50,000 annually approve while a majority — 56% — disapprove.  Among those who make $50,000 or more, 41% approve while 57% disapprove.

While voters aren’t pleased with how the president is handling the economy, they still do not blame him for the nation’s current economic conditions.  63% say they think today’s economic situation is mostly something he inherited while 30% believe it is a result of his own policies.  Seven percent are unsure.

These proportions are similar to those reported in Marist’s January survey.  At that time, the same proportion — 63% — thought the country’s economic conditions were mostly inherited, 25% said they were a result of President Obama’s policies, and 12% were unsure. Many Americans are no longer optimistic about the future of the U.S. economy.  57% of residents nationwide believe that, when thinking about the country’s economy, the worst is yet to come.  However, 39% say the worst is behind us.  Only 4% are unsure.  Similar proportions of registered voters share these views.

Public opinion on this question has flipped.  In January, a majority — 54% — thought the worst was over while 39% said there was more bad news on the economic horizon.  Seven percent were unsure.

This increased pessimism crosses party, economic, and gender divides.  And, while optimism has waned among all age groups, younger Americans, those under 30, are more optimistic than their older counterparts. 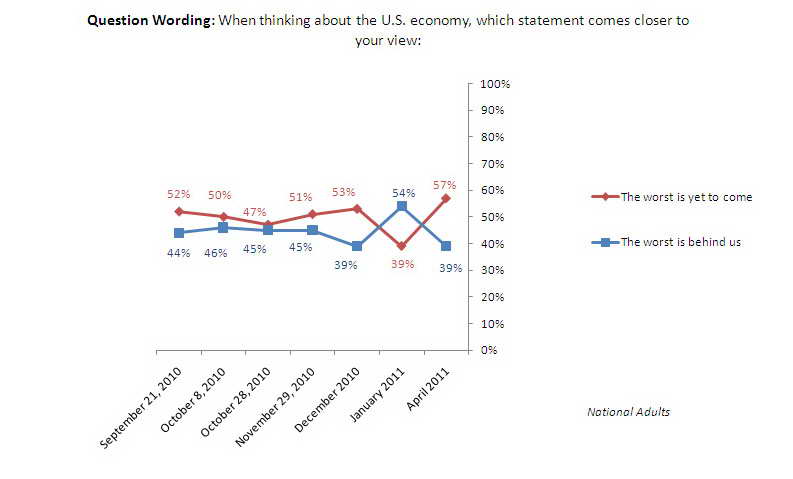 One in Four Americans Think Personal Family Finances will Get Worse

On a more personal level, 25% of Americans think their personal family finances will get worse in the coming year, 27% report their financial situation will get better, and nearly half — 48% — say they will stay about the same.

There has been a slight bump in the proportion of Americans who think their personal financial picture will get worse.  When Marist last reported this question in December, 19% thought they were in for more belt tightening, 29% believed their economic picture would get better, and a majority — 52% — reported their economic situation would stay about the same.

Table: Your Personal Finances — Better, Worse, or the Same? (Over Time)