Now that Governor David Paterson has withdrawn his bid for governor, New York’s Attorney General Andrew Cuomo appears to have a clear path to his party’s nomination if he chooses to run for the state’s highest office.

Cuomo’s job approval rating stands at 67% among registered voters in New York State, an increase of five percentage points since Marist’s last statewide survey in early February.  22% of voters currently say he is doing a fair job while 6% think Cuomo is performing poorly in office.  5% are unsure.

“Attorney General Cuomo has the highest approval rating of any statewide office holder.  These are the kind of numbers that would encourage his gubernatorial bid.  It’s his to lose,” says Dr. Lee M. Miringoff, Director of The Marist College Institute for Public Opinion.

In Marist’s February survey, 62% of the electorate gave Cuomo high marks.  26% reported he was doing an average job, and 6% thought Cuomo was performing poorly.  6% were unsure. 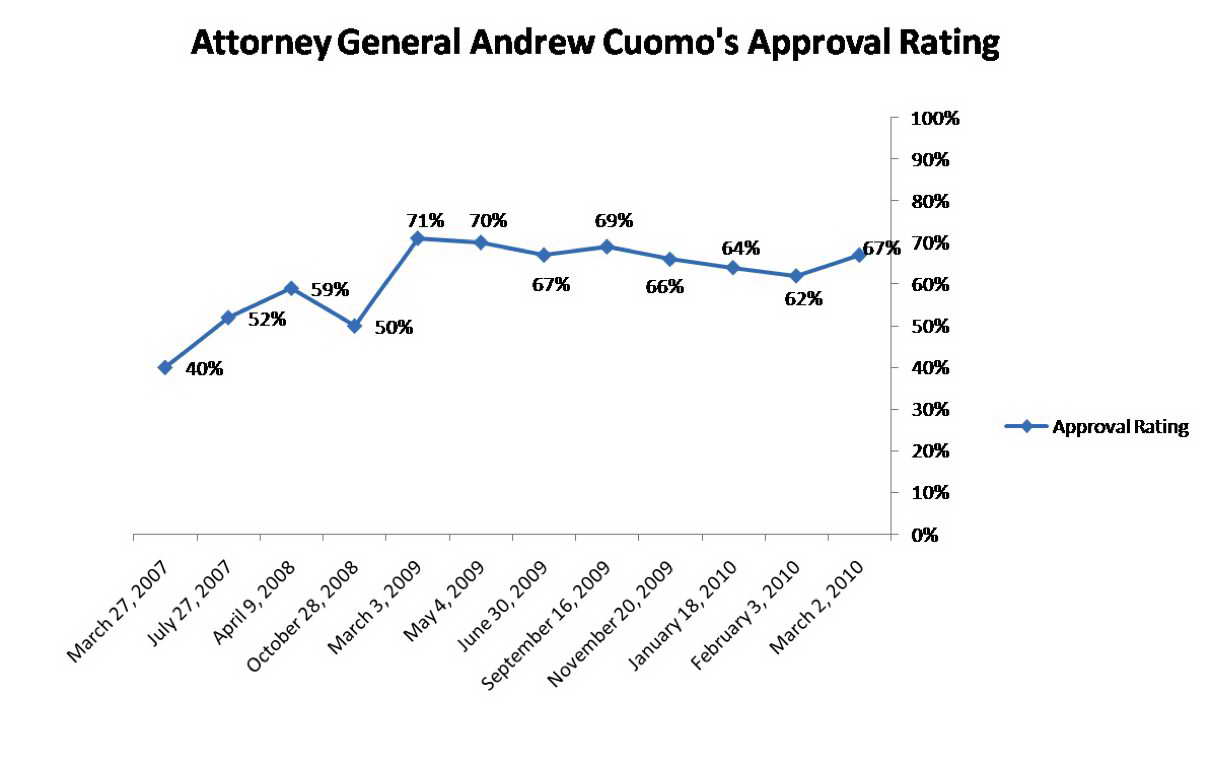 How does Cuomo fare when pitted against potential Republican gubernatorial candidate Rick Lazio? 64% of registered voters statewide say they would support Cuomo while 28% report they would back Lazio.  8% are unsure.  Little has changed since Marist last asked this question in early February.

Along party lines, not surprisingly, Democratic voters overwhelmingly back Cuomo with 88% reporting they would cast their ballot for him.  And, he receives majority support — 55% — of non-enrolled voters.  Cuomo even nets more than a third — 35% — of Republican voters.

New York State voters have spoken.  Once the dust from this year’s gubernatorial race in New York settles, nearly three in ten members of the electorate — 29% — want the next governor’s top priority to be jobs.  An additional 18% think economic development should be the highest item on the governor’s “to do” list.  17% say taxes should be issue number one.  Education receives 12%, and health care rounds out the top five with 10%.

Table: Top Priority for Next Governor

More than three-quarters of the state’s electorate — 76% — think New York is headed in the wrong direction.  18%, however, believe it’s on the right course.

Voters’ pessimism is not new.  When Marist asked this question early last month, 74% reported the state is on the wrong path while 21% disagreed with that assessment.