Blue Jeans: A Reflection of the Times 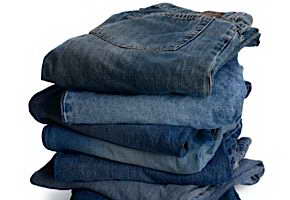 What accounts for consumers’ willingness to shell out their hard-earned cash for this fashion staple?  Perhaps, the answer lies in the past.

Although, nineteenth century businessman Levi Strauss is credited with designing the first pair of blue jeans, the origin of the term, “denim” remains cloaked in mystery.

As Levi Strauss and Co. historian Lynn Downey points out on the company’s website, there are a couple of theories about the origin of the word.  Downey notes that the material could be related to a fabric, partly made of wool, called “serge de Nimes,” which existed in France prior to the 17th century and was also found in England at the end of the 17th century.  Downey concedes that we may never know how a material made of silk and wool could  become associated with denim — a fabric made of cotton.  However, she speculates that it may have something to do with the fabric’s weave.

In addition to “serge de Nimes,” there was a material called, “jean.”  Jean, which was imported from Genoa, Italy into England in the 16th century was made, at least partly, of cotton and was known for its durability.  Jean and denim were quite similar.  However, they differed in the color thread used to produce them.

Fast forward to 19th century America.  Denim and jean had different connotations associated with them.  Jean was used for finer work clothes while denim was the fabric of men doing manual labor.

Enter Levi Strauss.  The Bavarian-born Strauss set up a dry goods business in San Francisco in 1853.  Nineteen years later, a tailor by the name of Jacob Davis, who had been making riveted clothing for miners around Reno, approached Strauss with a business proposition.  He needed a partner to patent and manufacture a new type of work clothes, and out of that partnership was born copper riveted “waist overalls” or what would later become known as jeans.

Blue jeans have evolved with our changing culture.  According to DesignBoom.com, a fashion design website, cowboys depicted wearing jeans in the movies became popular in the 1930s.   In the 1940s, soldiers fighting in World War II introduced jeans to the rest of the world.  And, Downey,  says the end of the war heralded another major change for this article of clothing.  Jeans broke from their association with work clothes and were considered to be more recreational attire.  Levi Strauss’ creation also took on another meaning by some during this time.  In the 1950s, jeans were viewed almost as ‘bad boy’ clothes  and were even banned in some schools.

Their anti-conformity reputation continued into the 1960s and 1970s.  The style evolved to include bell-bottoms, and anti-establishment activists saw jeans as a sign of protest.  The following decade signaled another metamorphosis.  Major fashion designers were jumping on-board the jean craze in the 1980s.  According to clothing brand, R.A.G. New York, everyone, including celebrities, wore designer jeans which, at that time, were affordable.  However, at the turn of the millennium, designer jeans became a status symbol, and the prices went up.

So, what’s next?  If the past is any indication, jeans will ride the wave with the changing times.  In fact, a recent blog on “The Wall Street Journal” website shows venture capitalists are turning to the blue jean industry during the recession.  It’s part of a move toward small, high-end consumer goods. But, one thing seems clear, no matter what shape jeans take, it will likely be a long time before blue jeans disappear from the market place.