45% of registered voters nationwide are not satisfied with their elected officials in the U.S. Congress.  This is the proportion of the electorate who say if this fall’s elections were held today, they would not support their current elected official in Congress and would vote for someone new.  41% would vote for the incumbent, and 14% are unsure. 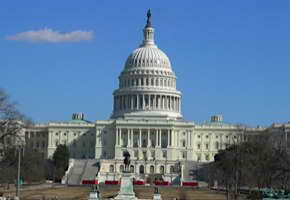 Little has changed on this question since Marist last asked it in February.  At that time, 44% said they would elect someone new, 42% wanted their current elected official to remain in office, and 14% were unsure.

“There is plenty of grumbling about Congress, and the winds of change are blowing,” says Dr. Lee M. Miringoff, Director of The Marist College Institute for Public Opinion, “Many voters think both the Democrats and Republicans in Congress are acting inappropriately.  Will they remember this feeling come November?  That’s still very much in doubt.”

While there is little difference among Democrats and independents since Marist’s previous survey in February, fewer members of the GOP now want to re-elect their current elected official.  At that time, Republicans were more divided.  48% wanted someone else, and 45% said they would support the incumbent.  8% were unsure.

Table: U.S. Congress — Incumbent or Other?

Country Moving Along the Wrong Path

53% of U.S. residents report the country is heading in the wrong direction while 43% say it is moving along the right course.  4% are unsure.

More Americans, however, do see the nation moving in the correct direction compared with Marist’s February survey.  At that time, 54% said the country needed a new road map while only 38% thought it was moving down the proper path.  8% were unsure.

3/31: Handling of Health Care Gets “Thumbs-Down” From Majority of Voters

3/29: Gillibrand and Pataki in Virtual Dead Heat
3/31: Handling of Health Care Gets “Thumbs-Down” From Majority of Voters
To Top