One month into his tenure, New York State Governor Andrew Cuomo is viewed favorably by more than seven in ten registered voters statewide, and nearly half — 48% — approve of his job performance thus far.  Many voters think Mr. Cuomo may be the right prescription to treat New York’s ailing state government. “Out of the starting gates, it’s so far so good for Governor Andrew Cuomo,” says Dr. Lee M. Miringoff, Director of The Marist College Institute for Public Opinion.  “His numbers surpass initial polls on the previous three governors and are comparable to his father’s.”

Key points from this NY1/YNN-Marist Poll:

o   66% of the New York State electorate perceive Cuomo as a governor who cares about the people of New York.  25% disagree, and 9% are unsure.

o   A majority of voters — 54% — say the governor is fulfilling campaign promises, 20% do not think this to be the case, and a notable 26% are unsure.

o   55% of New York voters call Cuomo a political moderate.  The governor is perceived by 26% as a liberal, and 12% think he is a conservative.  Eight percent are unsure.  Interestingly, a majority of voters, regardless of party, perceive Cuomo as a moderate.

There has been a sharp decline in the proportion of registered voters who think New York State is moving in the wrong direction.  Although a majority of voters — 52% — still report the state is traveling down the wrong path, 78% thought that way when Marist last posed this question at the end of October.  As for those who say the state is going down the correct road, 42% have this view while just 18% shared this perception three months ago. There has been little movement on this question since Marist last reported it in its September 24th survey.

When it comes to how the State Senate is performing, just 18% give the body high marks.  Included here are 1% who says it is doing an excellent job and 17% who report it is doing a good job.  34% rate its performance as fair while 43% give it poor grades.  Only 5% are unsure.

In Marist’s previous poll, 13% gave the Assembly above average marks. 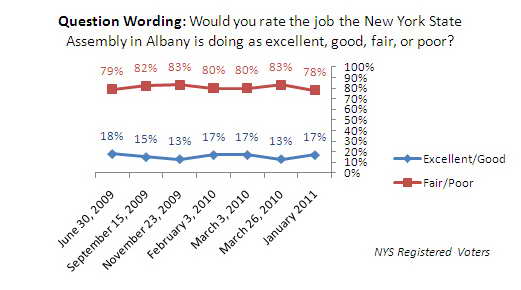 Voters Wait to Weigh In on New AG

Newly-elected New York State Attorney General Eric Schneiderman’s job approval rating is 34%.  This includes 4% who believe he is doing an excellent job and 30% who report he is doing a good one.  However, most voters do not give Schneiderman a poor performance review.  While 31% give him fair grades, only 5% say he is doing poorly.  More than three in ten voters — 31% — have either never heard of him or are unsure how to rate him.

New York State Comptroller Tom DiNapoli may have won re-election in November, but he continues to struggle to impress New York State voters.  34% give him high marks in office.  Included here are 4% who report DiNapoli is doing an excellent job and 30% who say he is doing a good one.  More than one-third — 36% — rate his performance as average while 8% think he is performing below average.  23% are still unsure how to rate him or have never heard of him.

When Marist reported this question at the end of September, 33% approved of the comptroller’s job performance.  33% gave him fair marks, and 13% thought he was performing poorly.  21%, at the time, were unsure how to rate him.